So I’ve definitely dropped the ball on posting… but life in the new house is absolutely chaotic right now with painting that does not seem even close to being done.  Seriously, how many coats does it take to cover laminate-wood paneling?!

We’ve had to proceed extremely slowly with the paint job, since not only are we are currently living with all of our belongings in several monstrous piles, but I am also taking a 3-week summer course for my master’s program that is sucking up my time, AND adding to the chaos, season 4 of Arrested Development is out (ML note: we’re not loving the new season like we hoped we would… what do you all think?).

So let’s discuss this beast of a painting project… As you will remember from an earlier post, our landlords bought us 5 gallons of primer and 10 gallons of antique white.  They wanted us to let them know if we would need more primer, so we figured the quickest way to do this would be to slap on one layer of primer on every surface in the house we wished to paint.  So over the weekend, we systematically went through the house priming the dining room, living room, entry area, stairwell, and one of the bedrooms.  The kitchen, one bedroom, and the upstairs bathrooms were just recently painted, and the other two bedrooms, the hallway, and the half bath seemed to be light enough paneling that we wouldn’t need any primer.

After spending almost a full day and a half (with some Arrested Development breaks thrown in), we realized that just the one coat of primer was not even close to cutting it.  So, we cracked open the 3rd gallon and went to town.  Unfortunately, that also means that we’re going to have to put at least one coat of primer on the master bedroom and hallway, since their pastel themed colors are still going to be too dark for the antique white.  See below for the true horror that is the aquamarine bedroom and pinky/purply/white that is the hallway. 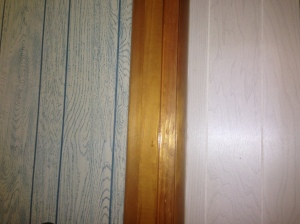 We’ve unfortunately been instructed by the landlords that the wood trim must stay, so you’ll see us trying to work around that.

So back to painting… I lost my mind somewhere in the middle of the dining/living rooms, and called it an early night on Monday.  I focused on schoolwork instead, while Mike continued slaving away.  I’m very eager for the painting to be done, but I dread having to finish it.  Tonight after work I WILL buckle down and get back to it.

By the way, if you have the world’s worst painting project to complete, might I suggest downloading Dan Levy’s “Congrats On Your Success” comedy album.  Seriously hysterical.